I have been using commercial antifoul for many years. In the old days it was TBT which lasted for years. On one of my yachts the International TBT was still good after 4 years. But TBT has been banned and so a new type was needed.
On Ti Gitu we first used an International 3 year antifoul and despite following the directions found
that it had dried out too much before launching and therefore didn't work.
After that we used Jotun Seaforce 30 supplied by Shepherds Marine Paint http://www.smlmarinepaints.co.uk/ I still use this company who have allways been very helpfull.
When using a self ablating commercial antifoul what actually happens is that a yacht does not go fast enough for the paint to wear away. Therefor it needs scrubbing every now and then. Even in places like the Caribbean where there are no tides so that the boat can be dried out I have found that even at over 60 years old it only takes me a couple of sessions diving and wiping the bottom clean.
The Seaforce 30 lasted well for nearly three years and withstood a lot of scrubbing during that time. As it had been so successful I decided to try Seaforce 60 which is a 5 year antifoul. It works well but after two years which included 2 Atlantic crossings it has worn through. I think this is a bit too soft for our purposes and we will be reverting to the Seaforce 30 which Shepherds have informed me will go over the Seaforce 60 OK.
I am sure that other manufacturers products will work in a similar fashion.
After leaving Emsworth we dried Ti Gitu out on the beach in Chichester harbour. Gave the bottom a good clean on one day and the next day dried out again, washed the areas where the antifoul was thin with fresh water and touched up before the tide returned. Paint should never be applied on a salty surface. 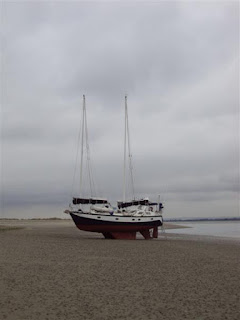 Dried out on the beach at East Head in Chichester harbour.
Posted by Paul
Email ThisBlogThis!Share to TwitterShare to FacebookShare to Pinterest