The end of last summer saw us leave and sail along to Dunkerque before crossing and once again going into Sandwich in for a week. can be difficult but the harbourmaster is helpful and found us a berth where we didn't dry out on too much of an angle.


After visiting family we sailed North across the Thames estuary and went into the Walton Backwaters before going up to .


After our last summer in and the Baltic sea we had decided to spend the winter in Ipswich We loved but won't bother going any further if we go that way again.


Ti Gitu is now 16 years old and the underwater paint had begun to fail. As she has twin keels and can be easily dried out I have been able to keep her well protected but the time was approaching when she would need grit blasting and re painting. We had intended to have the bottom blasted and to re paint in but didn't manage to get there last year.


The marina in will allow blasting and so we booked for Ti Gitu to be lifted out during April and booked the equipment to do the job, brought the grit and everything else needed and set about the job.


It was a month of incredibly hard work even with help from friends but with nine coats of paint it will hopefully last for a long time. 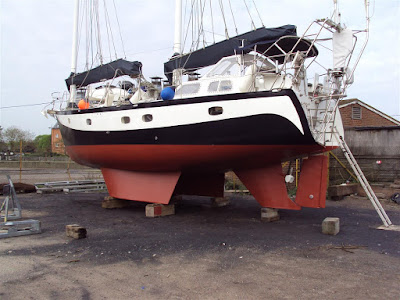 A nice clean bottom!
We were intending to head North to for the summer but May has seen cold North winds and so we haven't gone.


Despite Ti Gitu being really easy to sail we now don't really want to do the hard sailing that we used to especially not to windward and also prefer to day sail now. That means sailing round will take about 45 days sailing from where we are and as there are only four months or about 120 days left before we want to be in a winter berth again that doesn't leave much time to see places and people.


With that in mind we are deciding where to go and the North coast of and the Channel Isles are beginning to look attractive.


It will of course be the height of the sailing season and be busy but we may decide to put up with that. Time will tell.