Ti Gitu left Roscoff marina after 8 days and went up the Penze river to the drying harbour of Port de Penpoul. This is a large area protected by sand bank and island which has road along the top and a sailing centre on the end.


We went to the West side as strong Northerlies were forecast and laid out two anchors. At low water I went out onto the mud and found that there is just a thin covering of mud over shale so it was out with the folding shovel to dig the anchors in. This held us fine when it blew but we did notice that the mud seems deeper towards the middle.


In Falmouth we had re antifouled the propeller and I noticed that the paint had slightly cracked between the shaft and the prop. The next day I went out at low tide to check and found that the prop was not quite tight enough. I removed the prop to check the shaft and key and then put it back tightening it well!!


Each high tide we went ashore in the dinghy and walked into the old town of St Pol-de-Leon. On the first visit a very kind local gave us a lift to the supermarket telling us that it would close at 1200 as it was Sunday.


The town has some really old parts which are interesting and worth a visit.


The harbour captain came and told us that it was fine for us to stay for a while until Morlaix lock opened and even said that we could go alongside the quay. The only problem with that was that with the neap tides it was too shallow for Ti Gitu to get there. 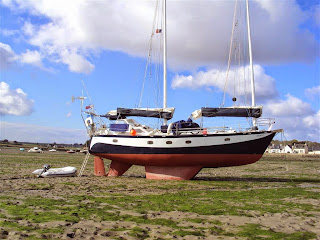 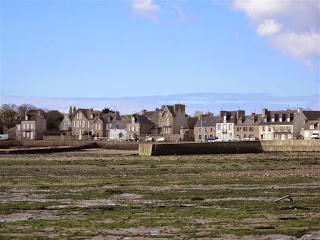 
On the 30th April we left and went up the Morlaix river and anchored overnight before entering through the nearly finished lock into the basin in Morlaix on the 1st May.


A great town which still has 15th century timber framed houses and is reasonably priced for moorings. The rail viaduct is incredibly impressive and still regularly used.


Again the weather is not promising so we will stop for a while and get the bikes off to tour the area.


Posted by Paul
Email ThisBlogThis!Share to TwitterShare to FacebookShare to Pinterest