Ti Gitu left Morlaix after two great weeks. This is a smashing town and I completely understand why so many Brits spend the winter there. We went down the river to anchor overnight. This was OK in the light winds but would be exposed in any strong winds. 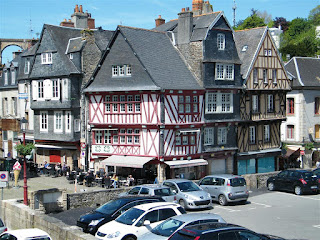 Next morning we left and had decided to head East for a bit as the wind was forecast to be Westerly for a while. We headed to Locquirec, just a few miles along the coast.
This is said to be sheltered from West winds and looks OK on the charts. Like many of the anchorages around here there are now dozens of moorings, mostly for small motor boats, which seriously reduce the anchorages.
Seeing that the stay afloat visitor moorings were well out into the bay and a bit bouncy we went close to the harbour looking for somewhere to anchor or for a mooring.
We asked a passing local who informed us that the moorings marked PASS (for passage) were the drying visitor moorings. He was worried about us drying and falling over and we had to explain that we have twin keels.
As we dried out the waves crept around the headland and we bounced very hard on the sand to the point that it was alarming. We eventually dried at quite an angle because there is a current through the area during the ebb and this caused us to dig a hole for one keel in the sand as we bounced.
The next morning after bouncing afloat we scarpered out of there as quick as possible. Shame as the village looked worth a visit.
With a gale forecast in a couple of days we decided to head back towards Roscoff to shelter before trying to go round to Brest as originally planned.
We tied up on the wall in Roscoff - which is slowly filling up with fishing boats – drying at low water onto a firm Sandy bottom. Roscoff is well sheltered from all but Easterly winds and it was comfortable through the gale. 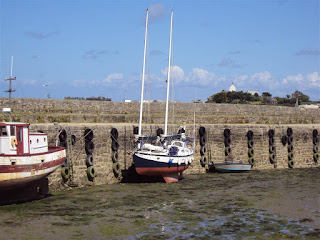 Alongside the wall in Roscoff

The town is really nice with a supermarket a short bike ride away. The harbour master is really helpful and at 7 euros a day well worth a visit.
I told the harbour master that we had spent the earlier Easterlies in the marina and that it is no good in an Easterly and he said that it is also no good in Southerlies where it has no breakwater to protect it. Who designs these places? Guess it must be similar idiots to those who design the thousands of white plastic blobs now sailing around!
Posted by Paul
Email ThisBlogThis!Share to TwitterShare to FacebookShare to Pinterest