After a couple of nights we left Brugges and sailed along the coast to Vlissingen pronounced Flushing. This is where the Dutch canal system can be entered and the 'mast up route' through Holland taken. It was a gentle trip just making around 30 miles a day ending up passing through Amsterdam on the North Sea Canal and out into Marker Meer.
While passing through the town of Haarlem we watched a rather different type of street cleaner. It was a small barge which not only cleaned the surface of any trash but also had a grab which was used to find and retrieve the bikes that had fallen into the water. There was a pile of them aboard. 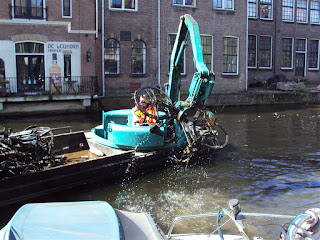 Strange street cleaner.
When I was younger we knew this as the Zeider Zee. It is a vast inlet which has been dammed in two places. The Southern part renamed Marker Meer and the North called Ijssel Meer.
In the South part is the island of Marken. The whole island is below the level of the surrounding water with a dyke all the way round the island and the harbour. 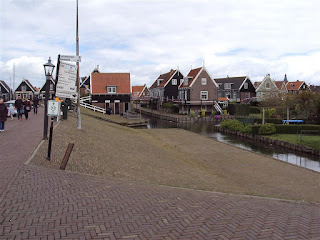 Houses behind the dyke at Marken.
The whole place is incredibly 'quaint' or 'picture squeaky' as Mo and her friends describe these sort of places. Ti Gitu entered the harbour to find that for three days the mooring there is free. Surprising as it is a very popular place and even in the cold weather we are having, the island is full of tourists all day.