Sark again and then North.

After the bad weather we left fairly early and headed from St peter Port over to again. This time there were no other boats in Creux harbour and we went alongside the wall. That in itself is intresting as the rise and fall of tide is high. Long ropes are needed. The bottom slopes slightly but not too much. 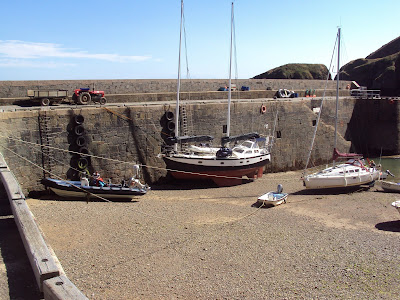 Alongside in Creux harbour.
Once dried out we walked up to the village deciding to hire bikes the next day to go see all of the island. It is really well worth the visit.
There are no cars on but there are quite a number of tractors which seem very busy.


There were some other boats which came into Creux harbour in the three days we spent there but it was quite swelly and no one stayed for many days.


After Creux harbour we went and anchored again in Dixcart bay and then in Fermain bay back on before going into St Peter Port marina to stock up for going back North.


Ti Gitu took the tide up to and should have had strong current with us but the very high spring tides didn't do what all the tide tables predicted and apart from going through the little Russell we didn't get much of a helping hand.


Arriving in Braye harbour it was apparent that the West swell was finding it's way in and despite deploying the flopper stopper and having paid for two days we decided that the place should be re named 'Pray' (for no swell) harbour and like many others we left the following morning and sailed for Portland back in England. That wasn't a bad crossing but the very strong spring tides did push us sideways a good ten miles and with making really good speed meant that we had to continually update the navigation so as to arrive where we wanted. Aren't chart plotters great.
Posted by Paul
Email ThisBlogThis!Share to TwitterShare to FacebookShare to Pinterest