A few days were spent in Portland where it did blow fairly strong for most of the time but on one day when it was calm we went ashore and took the bus to Weymouth and then on to Dorchester. There is a museum there showing the history of the Egyptian Pharaoh 'Tutencarmun' which is well worth a visit but rather expensive.


After Portland Ti Gitu sailed along to Swanage which along with Studland bay were pleasantly free of swell, apart from the motor boats. Swanage is really 'kiss me quick' being devoted to beach holidays but strolling into the further reaches shows a town built of what I guess is Portland stone.


Next was into Poole where we anchored in . There is one small area where Ti Gitu can stay afloat at 1.5 meters draft, even on spring tides and we can go ashore to the very kind 'Shell Bay Marine' and take the bus and ferry towards Poole and towns.


We were going to go to Yarmouth again but I noticed that it is possible to go up the Medina River into Newport the capital of the Isle of White so to avoid the strong currents in the entrance to Poole we went and anchored in Studland overnight and left early the next morning having a good sail to the Needles and then along to Cowes and up the river to Newport. 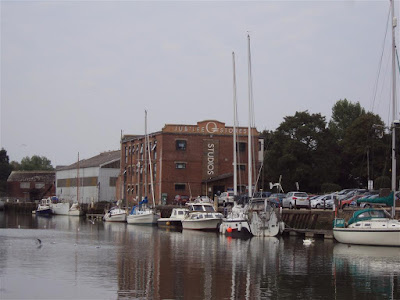 Alongside in Newport. It dries to fairly level mud.
The river totally dries but the bottom is reasonably flat so Ti Gitu dried out just leaning slightly away from the pontoon. There is electricity and water available and all at a very reasonable price. We decided to stay for a few days and visited Osborne House, actually a holiday cottage for Queen . They had so much 'stuff' in the house, real hoarder's, I would hate to have to keep it all clean.
Posted by Paul
Email ThisBlogThis!Share to TwitterShare to FacebookShare to Pinterest